A rather wonderful recipe I spotted whilst looking up Colonel Gore's Seville Orange Marmalade recipe in my antique Constance Spry cookbook. I quote in full.

'A good preserve for immediate use.

Stone the cherries. Crack a number of the stones, extract the kernels, blanch and skin. Add to the fruit with the lemon and put into a bowl in layers with the the sugar. Leave overnight. Bring to the boil, simmer 15-20 minutes, then boil rapidly until very thick.'

You have to ponder the word 'immediate', don't you? (Look closely at the quantities). First one to make it gets to eat it all, immediately.
Posted by Tim at 20:12 1 comment: Links to this post

Ironically, all the talk now is about debt - government debt to be precise, rather than the other, toxic sort we don't mention any more. The Institute for Fiscal Studies predicts (how dare they? they haven't usefully predicted much to date, have they?) that it will take thirty years, with higher taxes and lower spending, to service and repay the borrowing that our government (but it's not just ours) is planning to incur - and that's on some pretty dodgy assumptions, primarily that there's any national income to tax in the first place. If that's not toxic I don't know what is.

So, a simple question. Who is, or will be, doing the toxic government lending? It must be people (I use the word advisedly - it's not gerbils or trees or next door's cat, is it?) who have more money than they need for their own purposes (or those of whatever institutions they control). So who are they? Names and addresses please.
Posted by Tim at 13:33 3 comments: Links to this post

Apologies to my overseas reader(s), to whom this will be a small earthquake in Chile. Basically, the Sunday Times entrapped four members of the House of Lords into admitting that they would be prepared to accept varying sums of money in return for attempting to alter legislation that was passing before them. (Endearingly, none of these guys accepts that there's anything wrong with this, but they've all apologised anyway, just in case ...)

As I've noted here before, I actually believe the House of Lords is a pretty good thing. So I'd like to know how exactly the ST selected its victims. Was it on the basis of inside info, or was it random? I haven't actually read the article - newspaper not allowed through this door - but this crucial question certainly hasn't been addressed in any of the subsequent journalistic debate. Hopefully, it was targetted, via some kind of tip-offs, in which case we can just put it down to 'a few bad eggs'; but if they were randomly picked, then we have to suspect that the whole bloody lot are corrupt, or corruptible - in which case I'll be forced to reconsider my attitudes.

How is it that journalists never ever investigate each other?
Posted by Tim at 13:28 No comments: Links to this post

This concept was invented by Robert Pirsig in Zen and the Art of Motorcycle Maintenance, a book which is well due for a revival. I'd sum it up as 'the more you look at a problem, the bigger it gets'.

I had a very big one last night (Gumption Trap that is), when after I'd finished watching 'The Princess Bride' for the zillionteenth time, the touch pad, (i.e. that annoying mouse-clone which enables, indeed forces you delicately and precisely to do with a fingertip what you could previously do, roughly and entirely adequately, with your whole hand), followed the 'cue' example and decided to pack up. Imagine my dismay. I got despondant, paranoid and drunk.

The way out of this trap, as always, is by calm cool analysis. This morning I reinstated the old laptop by way of back-up, then packed this one up and took it to the local Oxford Road repair shop. William delved into the software, because he'd had exactly the same problem and thought it was something to do with it thinking it was a tablet PC (are you still awake?), played with esoteric software settings for the best part of an hour and finally admitted defeat. It's got to be hardware, we can't do that here, you'll have to send it off to Toshiba, but probably cheaper to buy a new machine.

I said thanks mate, what do I owe you? He said don't be daft, I enjoyed that, and it's actually helped me too - why don't you just buy a nice wireless mouse and use that instead? Somewhere during the hour, when we were discussing the 'send it to Toshiba' option, I mentioned in passing the 'cue' problem. He gently lifted up the key pad, had a look and explained why he daren't touch that - something to do with rubber and superglue - put it back, we shook hands and parted.

Well, I went to PC world and got and installed the mouse - it works beautifully on the texture of the sofa under my right hand as I type. And guess what -

The moral of this rambling story is: Don't Give Up. Don't lose your gumption.
Posted by Tim at 21:35 No comments: Links to this post

On 7 February 1964, The Beatles arrived at the newly renamed John F Kennedy airport to a euphoric reception. ‘I Want To Hold Your Hand’ had hit number one on Billboard the previous week, and America was finding itself, to its entire surprise, being surfed on a curl of optimism, suddenly borne up and over the quagmire of despair which had threatened to engulf them since the murder less than three months before.

I’m old enough to remember those two events, and mature enough to draw parallels. Today, 20/1/09, I saw something very akin to 7/2/64 . Akin, not alike. The tragedy America emerged from then, with the Beatles’ help, can’t in any sense be compared to the tragedy America is going to emerge from, soon, by Barack’s will. But the spirit I saw and heard this afternoon, in his address and in Washington Mall, was that exact same spirit of young America. It worked then and it’ll work now. God bless.
Posted by Tim at 21:20 No comments: Links to this post

This letter (you know the one I mean) has just recently gone up in a puff of smoke, well a loud ominous click, on my keyboard. So, after the mandatory five minutes of anger, despondency and despair - will I have to buy a new computer just because of this? do I have to go through the hell of transferring all my stuff? I don't want to do any of that, especially because Windows 7 is about to appear, etc etc - I decide to monitor my, and other people's, actual usage of this character. Initially, I thought: open a big document and do a 'find all', but I rapidly saw the flaw in that ... So, I read about twenty pages of 'Shantaram' (and by the way, do please get it if you've got 1000 pages worth of non-stop spare reading time - just read the blurb on the back if you don't believe me) - guess what, the evil letter didn't turn up once! This calmed me down a bit.

So, I've backed everything up, and on Monday I'll take the laptop down to the friendly computer repair guys who camp out in the Post Office down the Oxford Road. I'm sure they'll be able to fix a little burnt-out relay, hopefully uite uickly oh shit.

Did you see what I did there? Kwality writing I'd say. Just as long as I don't lose E.

Howling gale outside, rain coming down the chimney.
Posted by Tim at 20:39 1 comment: Links to this post

That's the amount every baby born in the UK will start its life owing Gordon Brown, according to the Tory's magnificent new election-winning (for Labour) poster campaign launched today.

Many many thoughts spring to mind, but just one for now: how and when should the parents tell them? First birthday, in writing, I reckon, get it over with.
Posted by Tim at 15:52 1 comment: Links to this post

I've run out of 'kindling' (or sticks as we used to call them), so the Christmas tree has been dismembered and recycled into my fireplace. Brilliant - it's now so warm in here I've had to take my jumper off. Delivery expected about Tuesday, by when it's going to warm up so I won't need it anymore.
A new musical challenge received, but this one needs drums and I haven't got access to the old Roland TR707 drum machine at the moment, so will have to investigate the sample pads on the Yamaha workstation. I need to get CuBase, but that requires a computer upgrade, a place I'm not prepared to visit just now.
Posted by Tim at 19:31 No comments: Links to this post 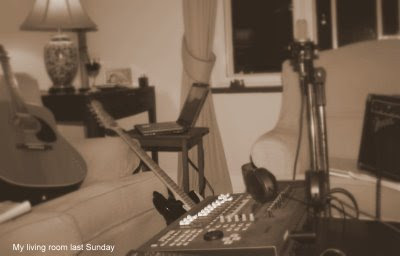 I bought two CDs today: 'Rockferry', the de luxe edition of Duffy's lovely take on Dusty and Aretha and all that 60s emotion (immaculately assembled by the great Bernard Butler); and Amadou & Mariam's exquisite 'Welcome to Mali', as challenging a cross-over album as you're likely to hear this year (and I do mean 2009).

Enough of the rave reviews. My real point is as follows. I paid a tenner each for these at HMV. I just checked, and I could have bought each for eight quid on iTunes. For my extra four pounds, I got sumptuous CD packaging (posters, photos, beautifully textured boxes etc); tangible physical objects which can engage my senses of touch and sight without going anywhere near a bloody computer; and most importantly, CD audio sound quality rather than that depleted MP3 I'd have got from the download versions.

Downloads, MP3 and iTunes have their role, obviously - I use them all the time - but they won't kill off the solid music media just yet.

The body count this morning indicates that the ten drinkers consumed sixteen and a half bottles of Nicolas Feuillatte and one of Piper Hideandseek or whatever it's called. When Paul came round to collect his coldbag (and some uneaten cake), he said: 'Is that all?' Actually, come to think about it, it's not really that much over seven hours, is it? (though it didn't feel thay way at 3 a.m. on 1/1/09). Amazingly, no other alcohol was knowingly imbibed (apart from Andrea's three bottles of Carlsberg Low Alcohol lager - she has a very good excuse.) So I have nine unopened reds and six whites to do something useful with. Perhaps I should have another party ...
Plugging the laptop into the hi-fi and letting people loose on iTunes was a very good move. People took turns to sit down and play DJ so that I could carry on dancing with impunity. A mark of a good party - I was forced by Paul, at two o'clock, to put on 'Trampled Underfoot' by Led Zeppelin (on vinyl!)
Just before midnight we googled the original Robbie Burns lyrics to Auld Lang Syne and displayed them on the telly so that they could be totally ignored by all.
The food mostly vanished in minutes, including about a kilo and a half of chilli con carne. The one major miscalculation on my part was french bread. What can I do with six stale baguettes (out of eight purchased)? Don't say 'breadcrumbs', that lot would keep me in weiner schnitzel and meatballs for months.
Clearing up is mostly done, but my so-called non-stick roasting tin might be a goner after Gordon Ramsey's suspect spicy sticky chicken drumsticks did their worst. Val suggested simmering it on the stove with some Fairy liquid, 'like making gravy', but my appetite's not quite up to that yet.
Posted by Tim at 19:07 3 comments: Links to this post