Executive Summary:
·         Many species of animals and birds have become extinct.  I have allowed camels to debut in this category, even though they are being ridden by magi.
·         There are a few more snowflakes than last year.
·         The continued reduction in the volume of glued-on glitter is, as ever, to be welcomed.  I expect making it illegal to be a high priority of the next Labour government.
·         I have felt it necessary to introduce a ‘Politics’ category.  One of them (self-created by its sender) says ‘Happy Brexmas’; the other is a highly sentimentalised picture of the Houses of Parliament.

The full figures (2017’s, where applicable, in brackets):

Card Of The Year is this picture of some people walking along a footpath in the snow beside some woods: 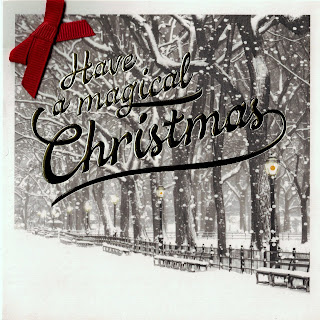 If you turn it upside down – 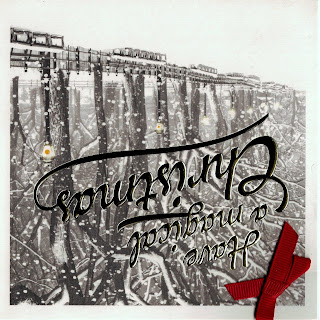 It’s a goods train going over a viaduct.

* This 'Everything secular' card depicts, amongst other things, a Santa, a plum pudding, mistletoe, baubles, a snowman, a Christmas tree, bells, holly, a star, snowflakes, and, weirdly, a mug of cocoa - but no booze!!!

Feet probably came first, because we tend to walk in 4/4 time (although see below for the waltz).  Breathing is two to the bar – in, out – and the heartbeat is tempo rather than rhythm (it’s no accident that the catchiest riffs are at around 120 bpm, twice the average pulse rate).

So the breathing would tend to synchronise with the footsteps, and sooner or later sounds – grunts, probably, to begin with – would naturally get uttered.  In pre-agricultural societies, there was a lot of group walking, so the grunts would get synchronised within the group.  Once they stopped for a rest, someone would still have those grunts and that walking rhythm persisting in their head, and eventually they’d start to slap their thighs, or clap their hands, someone else would laugh and join in… and you have the start of music.  The roots of rhythm, as Paul Simon beautifully captured it.

Oh, and that 3/4 – I don’t know about you, but that’s how I tend to get up a steep slope.  One leg does the heavy lifting, then it’s the other one’s turn.