Strictly, for the Birds?

Apparently what we lack is an Official, Elected, Government-approved National Bird.  I agree: what could be more important?
Wikipedia suggests that we already have one,, the Robin, but he/she’s never won a popular vote or official recognition. Several of our candidates are already taken – Denmark has nicked the Mute Swan (don’t tell Her Maj), and Sweden the Blackbird.  But, looking more closely, that shouldn’t be a problem – Golden Eagles are everywhere!  Even in Scotland.
Which leads me to two related thoughts.  One, can’t we cast the net a bit wider?  Does the bird have to live here, or even exist?  After all, our national animals seem to be the Lion (not particularly indigenous) and the Unicorn (not yet detected).
And secondly, shouldn't a National Bird in some way be reflective of national character?  (Out of respect for my American friends, I say nothing about the Bald Eagle’s feeding habits.)  Just looking at the state of the Kingdom as we near our defining General Election, I’m surprised that the Magpie and the Ring-necked Parakeet aren’t on the list.
So, here’s my considered candidate for Britain’s National Bird: 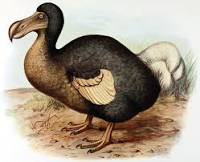 The Map Is Not The Territory

Or to put it in more dynamic terms, ‘The Route Is Not The Destination’.

The other day, I was thinking about tarting up the appearance of my blog, in a probably vain bid to attract my readership back into double figures.  So I went to the appropriate place in the dashboard thingie, did what I thought I might want to do, and got ‘Error bX-evmf18’.

Guessing I might need some help in interpreting this, I mailed the Help Forum.  Sure enough, a prompt reply from a friendly expert suggested, amongst other things, that I try doing it in Chrome rather than IE.  I always obey techies as a first resort, and yes, it worked!  (As it happens, I ended up not making any changes, but that’s not the point.)

As a follow-up, whilst saying thank you, I wondered why this should be – why should the same program work differently depending on the browser I use to access it?  I got the somewhat unhelpful reply “Internet Explorer, Chrome, Firefox, Safari, Opera...all of these browsers render information differently, which is why you're seeing different behavior in different browsers”, which is really just a kind of rephrasing of my question, isn’t it?  So the experts don’t know either.

This anecdote is trivial, no serious harm done.  But it’s by no means a unique instance of this sort of stuff, and I can’t help but worry a bit.   We hear about the forthcoming ‘Internet of Things’, whereby, within the blink of an evolutionary eyelid (see Moore’s Law), our washing machines will be telling us to change our socks, our driverless cars will be deciding whether to run over the stray dog or the pram, and our wheelie bins will scold us for dropping a plastic bottle in the wrong one ...  And I think: are they serious??

For an industry that, after decades, can’t even agree on a set of standards for how to take us to our chosen destination without rebuilding the destination (‘Open Systems’; what were they again?), to expect us to buy into this infinitely more complex, dangerous, untried, hackable guff is either recklessly naïve or threateningly sinister.

Anyway, that’s what I think.  And now you’ll have to excuse me, my socks have just told my freezer that my toenails need cutting, and offered me a pickle fork to do the job, and are now trying to walk my feet jauntily into the dishwasher.
Posted by Tim at 21:07 3 comments:

Next Sunday is Mother’s Day, right?  Well no, not according to my mother it isn’t.  It’s Mothering Sunday.


For a progressive woman, she was remarkably traditional in some respects, this being just one of them.  She hated the term ‘Mother’s Day’, and I’ve obviously inherited some of her attitudes, because so do I; though for possibly different reasons.


My mother always said that, though change for the good was to be fought for, change for change’s sake was a bad thing.  Traditions have value, and shouldn’t be cast aside simply because they’re old.  I subscribe to that.  (Although I don’t entirely accept her secondary motive, which was that ‘Mother’s Day’ should be resisted because it was ‘American’.  She was irrationally against nearly all things American, at least in her later years.  The thinking, or emotion, behind that shift I’ll never know: after the War she had nothing but praise for America’s role in defeating Nazism, and Lend-Lease and the subsequent Marshall plan, without which, she rightly thought, Europe would have collapsed back into the same kind of chaotic vacuum as it did in the twenties and thirties.)


Anyway, to come back to the point: she was wrong about ‘Mothering Sunday’.  It was originally nothing to do with motherhood, but was invented to lure people back to their ‘mother church’, and only fairly recently became subsumed into a celebration of the role of a mother.  But that’s a quibble: what’s in a name?  What it stands for is what matters.


I do, when I notice or remember it, think of my mother on that day, but not exclusively then.   I think of her quite often, randomly and unexpectedly.  Everyone has a mother, and it’s a bit glib to compress one’s recognition of her into this one day a year, isn’t it?  I can imagine a mode of thought which says “Right, that’s her done for another year.”


That’s reprehensible, and that’s why I dropped the apostrophe in the title of this post.  Even better, shift it to the right: “Mothers’ Day”.  Let’s celebrate all mothers as well as our own – the deprived, starving, abused, unwitting, unwilling.  We all owe them our existence.
Posted by Tim at 23:14 1 comment:

Writing Is The Best Therapy

Back in the 1950s, the Reader’s Digest used to have a little feature called ‘Laughter Is The Best Medicine’, one of the many pearls of wisdom imparted by that amazing publication.


Today, I had cause to be angry with someone, so I composed an email, detailing the causes of my anger with ice-cold precision.  It took me about an hour to write.


I didn’t send it, of course, and nobody, including me, will ever read it.  But it did the trick.  By the time I pressed the ‘Don’t Save’ button, I was laughing, mainly at myself.
Posted by Tim at 23:04 2 comments:

I’d quite enjoyed Julian Barnes’ novel ‘Arthur and George’ a few years ago, so I thought I’d give the ITV adaptation a go.  The story – about Sir Arthur Conan Doyle’s detective-like espousal of a lost cause in reaction both to bereavement and to Holmes’s unsupportable weight – is a fascinatingly disturbing one, and I like Martin Clunes a lot.


Well, I watched for twenty minutes (forcing myself to ignore the persistent, obtrusive, irrelevant background music and cupping my ears to try and catch, beneath the tinkling pianos and droning cellos, what the actors were actually saying).  I did quite well, and was getting quite drawn in to the story (although flashbacks to Wolf Hall and how to do it properly kept intruding), when the story went blank and (I think) four minutes of very loud adverts asserted themselves.


I say that, but to be honest I can’t be sure about the loudness or the duration of the adverts.  I went and did a bit of dishwasher loading, came back and undid the mute button, and watched a bit more.  Even more dialogue-drowning, subtlety- bludgeoning foreground music; and then, after another twenty minutes – well, you know the rest.  I switched off at ad break #3, and won’t be watching next week’s episode; which is a great shame, because I’m sure there was a pretty good drama lurking somewhere behind the crud.


When will they ever learn?  Extended drama (with or without the music!  That’s another rant, really) requires extended attention.  Just go to the cinema or, even better, the theatre to prove this.  If the only way to fund quality television is to slice it up and dump dollops of gunk into the interstices, I’d rather do without it.